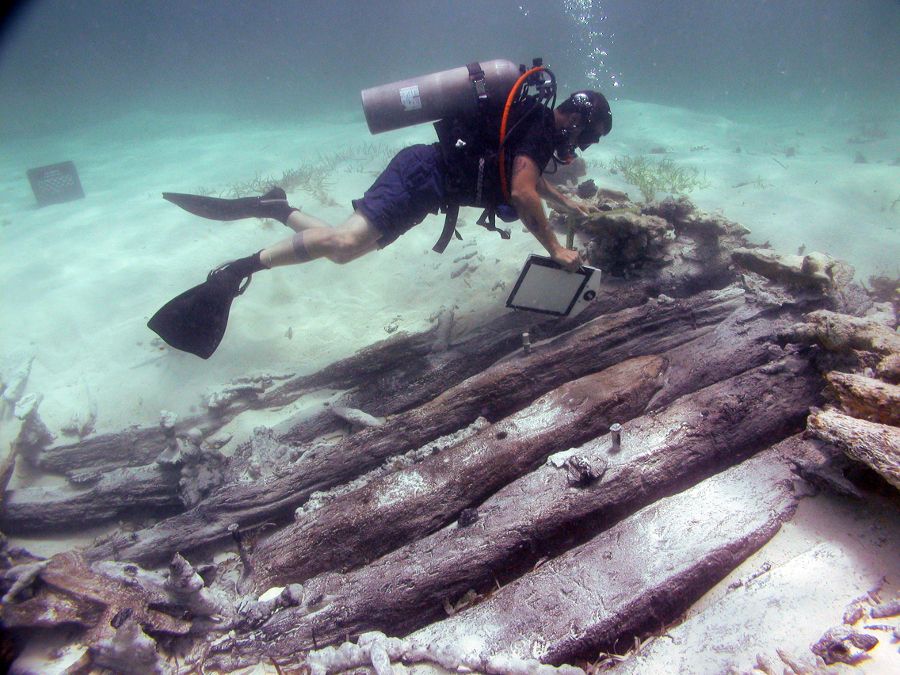 Experts estimate that there may have been over 1000 ships that have wrecked off the coast of the Turks and Caicos Islands since the early 1500’s. Indeed, weather conditions and barrier reef walls used to prove quite harmful and fatal for many ships, particularly in the area around Northwest Point, directly off the coast of Provo. These ships and the records and artifacts they carry, are extremely valuable to the Turks & Caicos government, which sometimes tries to preserve or excavate a ship for educational purposes. The first wreck that always bears mention, is the Spanish slave ship, the Trouvadore. As the ship made it’s way to Cuba, to force the 300 Africans on board to work the lucrative sugar cane plantations, it wrecked in spectacular fashion, just off the coast of Middle Caicos. The surviving slaves, Africans from the Mande tribe who spoke Bambarra, became settlers of TCI, and with them, they brought their cultural practices, such as dancing, which is still on display in the annual Maskanoo parade, basket weaving, and the production of smooth Caribbean rum. Most of the locals, or “belongers” as they are called, can trace their roots back to these escaped slaves and indeed the idea of freedom is central to the history of the Turks & Caicos Islands.

Next up, we have the Molasses Reef Wreck. In 1513, a Spanish caravel ship wrecked off the waters of French Cay. This ship has proven to be quite educational, and many artifacts and records can still be viewed in the Turks and Caicos Museum today.

Unfortunately, novice treasure hunters originally believed that they had “struck gold” by finding Christopher Columbus’ sunken Nina, and when they found that they were wrong, they looted the ship, making off with precious artifacts, but also causing extensive damage with the dynamite that was used to dislodge the artifacts. Even so, the Molasses Reef Shipwreck still remains one of the most treasured items in the Turks and Caicos because of all the information it has yielded.

Should you actually wish to SEE an actual shipwreck when visiting TCI, feel free to explore La Famille Express. This freighter ship broke loose of it’s mooring during Hurricane Frances in 2004 and it drifted into the Caribbean Sea and now sits atop a barrier reef in 7 ft. of water. The rust and decay give the ship character and many people enjoy diving off of it or photographing it.

So, there you have it, more fascinating history in an already enchanting place. For more information on sunken ships and planes, feel free to visit the Turks and Caicos Museum, or if you just want to photograph a wrecked ship, make your way over to the La Famille Express. Either way, you will feel even closer to the rich history and culture of the Turks and Caicos Islands.

Grace Bay Turks and Caicos Destination Wedding at the Tuscany!

This destination wedding at Grace Bay in Turks and Caicos was an all-white party! The…

From its perch overlooking the Turtle Cove marina just west of Grace Bay Beach, the…

The Benefits of Hosting a Destination Wedding in Turks and Caicos: Getting Married at the Tuscany Resort on Grace Bay Beach

Wedding planning can be extremely overwhelming: From organizing your ideas and diplomatically managing the input…

Back to the Honeymoon Tuscany Turks & Caicos

Two years after the wedding, Bugs and Kevin traveled back to their honeymoon spot: the…

Fall In Love With Fall In Turks and Caicos

Here at the Tuscany resort in the sublime Turks and Caicos, there is no shortage…