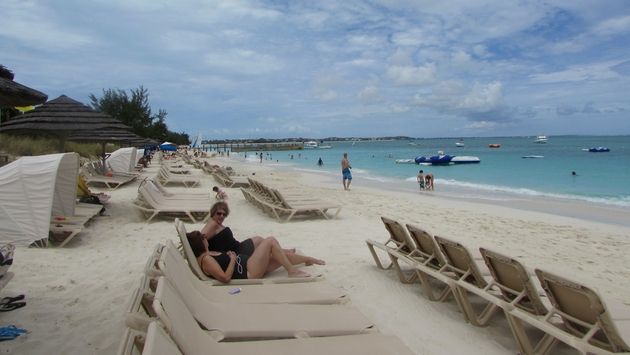 We like to share this blogpost from Travel Pulse about the Turks & Caicos tourism number in 2014. We are not surprised and are happy the numbers remain strong. Surely a great improvement of  the 2013 numbers.

Add the Turks & Caicos the list of warm-weather destinations posting strong tourism numbers in 2014. Visitor arrivals to the destination surged by 35 percent in the first half of 2014, totaling 676,937 travelers, including 199,347 overnight visitors and 477,590 cruise arrivals, said government officials.

The Grand Turk Cruise Center hosted 477,590 cruise ship visitors in the first half of 2014, a 40 percent increase over the 341,352 cruise arrivals recorded during the same period in 2013. Officials expect the Turks & Caicos cruise port to host more than one million visitors in 2014.

Turks & Caicos tourism is benefitting from an expanding base of upscale hotel properties, including the recent expansion of the Beaches Turks and Caicos resort, which added the Key West Luxury Village complex in May of 2013.  The Turks & Caicos is among five Caribbean destinations reporting an increase of more than 10 percent in new hotel rooms under development according to research firm STR. The company’s Caribbean/Mexico hotel development report for March 2014 shows 545 new rooms under contact for construction in the Turks & Caicos.

“With the completion of the expansion of the airport as well as the planned upgrades and facelifts for the beautification of Grand Turk which will be carried out under the Infrastructure Development Fund, I am extremely optimistic and confident that our numbers will continue to climb,” said Dr. Rufus Ewing, the Turks & Caicos’ premier and minister of tourism, culture and heritage.

The Turks & Caicos’ overall visitor arrival numbers are on a record pace, added Ralph Higgs, director of the Turks & Caicos Tourist Board. “If all factors prove equal and barring any unforeseen disasters, natural or man-made, the Turks and Caicos Tourist Board is projecting a total of 1.35 million visitors for 2014, the highest amount of visitors ever within a given year,” he said.

Higgs added that the destination’s strong land-based tourist arrival numbers for 2014 represent a turnaround from recent years. “This projection signifies an overall increase in land-based arrivals, which was declining and or static in 2012 and 2013 respectively, following a record-breaking 2011,” he said. “With the Providenciales International Airport nearing completion, we hope to improve our visitor’s experience from the point of entry until their return.”

MSN Lifestyle: TCI amongst the 15 Best Island Vacations in the Whole Entire World

WOW, we are proud that, TURKS AND CAICOS ISLANDS, are considered to be, one of…

So Happy to reconfirm that our Grace Bay Beach is the nr 2.  in the…

Thanks for Noticing Forbes! Thank You... Forbes ~ If we’re giving points for convenience, ease…

We have Qualified the Winners….They Are~

Let the world know what the #1 Island in the World is ~ Turks and Caicos!

As you may be aware, Providenciales, Turks and Caicos Islands was recently named the #1 Island…