Hemingway’s is a popular, award-winning beachfront restaurant that is a self-proclaimed, “…..culinary ode to a masterful author.” So, yes, it’s that Hemingway. As you may recall from high school or college classes, Ernest Hemingway often wrote about the sea, and indeed the menus offered at Hemingway’s contain clever plays on his story titles.

Examples include: “The Sun Also Rises,” referring to delicious breakfast offerings, “A Moveable Feast,” referring to amazing dinner offerings and “The Old Man and the Sea,” referring to the freshest catch of the day. Indeed it is seafood all the way at Hemingway’s.

From the Mahi-Mahi to the Seared Black Salmon to the Curried Shrimp to the Crab Cakes, tasty offerings from the sea can be had in abundance. There are also Caribbean-inspired plates, such as the Grouper Creole, served with Traditional Island sauce and there are also other tasty food samplings, such as Filet Mignon, pasta and chicken. Fine wines and appetizers compliment any dinner at this fine establishment. For breakfast, it’s mostly lighter fare, such as eggs, fruit and the wildly popular cinnamon raisin French toast. For lunch it’s an array of gourmet sandwiches, entrée salads and specialties such as soft fish tacos, mango shrimp salad and Caribbean jerk chicken and chips. And for dessert, well…..feast your eyes on THIS. Desserts for either lunch or dinner include Key Lime Pie, Creme Brûlée, Rum Cake and Fried Ice-cream with cinnamon powdered sugar and chocolate sauce. Ooh la la!!

The atmosphere at Hemingway’s is casual, yet elegant, in that breezy, balmy Caribbean way that makes you relax and take in the scenery. And the scenery is spectacular. Situated on a deck overlooking the sparkling turquoise waters or overlooking a spectacular sunset, this is open-air dining at its best. So the next time you find yourself in the Turks, check out Hemingway’s.

You won’t regret it.

Let us help you to make a reservation

You may make a reservation via the Tuscany. We will attempt to make it with the party you requested. A confirmation by us and party will be send to you. Please click REQUEST A RESERVATION button to start. 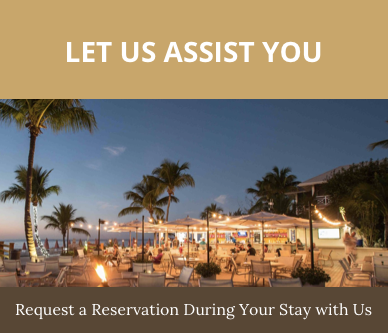