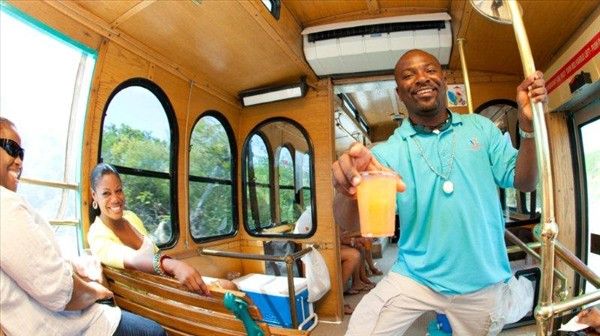 Fun, colorful, educational and vibrant, the Concha Woncha Tour has been pleasing customers for years. Named for the Island’s informal mascot, the conch, visitor’s will learn tons about the conch on the various stops that the tour makes.

The tour is broken up into 4 major segments.

The first stop is Conch World, the world’s only major harvesting facility for the queen conch. At Conch World you will meet Sally and Jerry…….real, live domesticated conch animals. You will also learn tons about the how these large sea snails are used, eaten and distributed all around the world. You will then have a chance to browse through the gift shop to find conch-themed treasures and you can even buy your own conch shell for
the mantle at home!

Next, you will be heading towards the Turks & Caicos Cultural Centre…where the Director of Culture will entertain you with local music, dancing and story-telling. The Turks & Caicos Islands has a unique and rich history that most people are unaware of. The Islands were first settled by the Lucayan Indians. The Lucayan Indians were peaceful and they excelled at seafaring, salt raking and farming. They all but disappeared with the introduction of the Europeans…..indeed it was Christopher Columbus who first landed in the Turks in 1492. After he left, searching for the Americas, the Bermudians, French, Spanish and British came, conquered and cultivated in the Turks. In fact, the British Loyalists, fleeing the American Revolution, came to the Turks, brought slaves and set up fantastic salt plantations. The wealthier of these Loyalists were often robbed and pillaged by pirates…and….well……there’s a lot more, but you’ll just have to take the tour to find out!

Next, it’s off to the gorgeous Chalk Sound National Park. Chalk Sound is a shallow cove of bright, sparkling turquoise water that is dotted with tiny fertile islands. There are many spectacular panoramic views to behold and there are many photo opportunities. Lush vegetation covers much of the tiny islets and jagged limestone formations create an almost surreal natural wonder. Since motorized boats are not allowed in this lagoon, a peaceful and tranquil atmosphere permeats the air. Indeed, this is the Turks and Caicos at its best.

After you have blissed out to the soothing sounds of the gentle lapping waterand taken in the beautiful crystal-clear water, you will be off to your final stop….

Da Conch Shack! One of the Islands’ perennial favorites, this beach bar has been named “One of the World’s Top 50 Beach Bars” by CNN and has been called “the ideal spot” by the New York Times. So if you have worked up an appetite, you are in luck! Conch fritters, conch curry and conch ceviche are on the menu and the famous rum punch is not to be missed.

All in all, you will have spent a fantastic day getting to know the finest points of the Turks and Caicos Islands. From the lively and spirited entertainment, to the wealth of history and knowledge, to the lovely and unparalleled views, to the tasty treats at the end, the Concha Woncha Tour explores paradise at its best.  It’s definitely a day well spent.

Experience the Caribbean Up Close

For those traveling to the Turks and Caicos Islands for some summer fun in the sun,…

From Our Family to Yours

Dear guests and new friends,  We wish to take a moment to express our appreciation…